The first positional group of interest is defensemen, who will be presented in the three different game situations (Even Strength, Power Play and Short Handed). Before diving into the GAR values for individual defensemen, be sure to check out the introduction, which outlines the process for data collection and team-aggregate values. The following charts illustrate the GAR of defensemen in different game situations and time-on-ice: 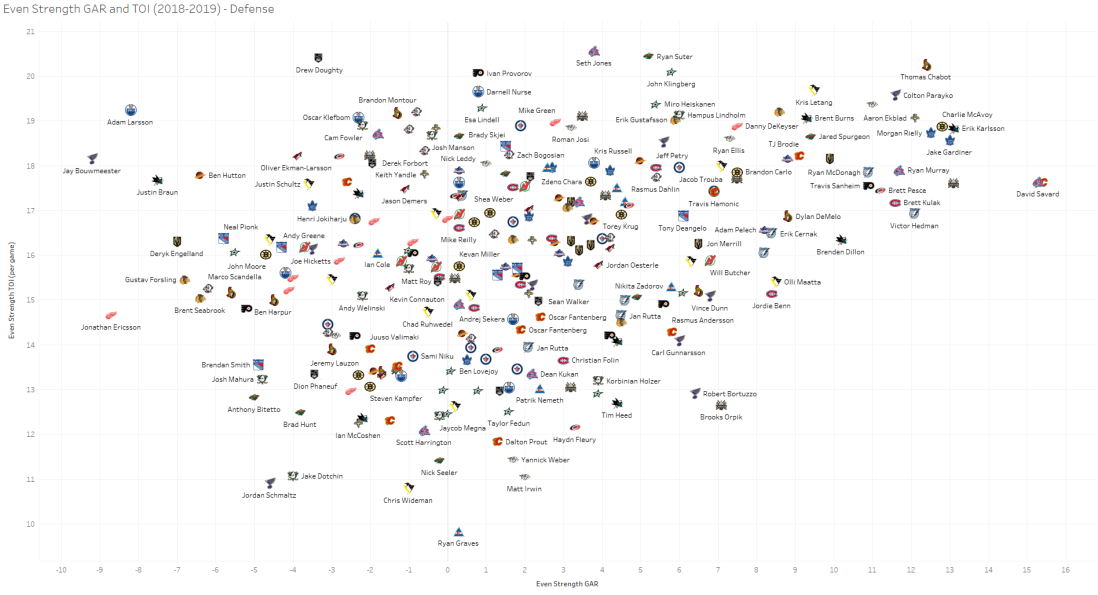 What kinds of themes can be extrapolated from these charts? There are a few defensemen that jump off the page in terms of minutes played and GAR.

At even strength, Tampa Bay and Montreal were the only two teams whose defensive units (min. 500 minutes) were all positive GAR. On the opposite end, Detroit only had 2 defensemen finish with positive GAR – Mike Green and Danny DeKeyser.

Mark Giordano finished with the best even strength GAR (15.4), just barely edging out David Savard (15.3). He did this averaging only 17.6 even strength minutes per night, ranking 72st among defensemen.

Jay Bouwmeester posted the worst even-strength GAR (-9.2), yet was rewarded with his teams’ third most ice time (18.1 minutes). In shorthanded situations, he played the second-most on the Blues (average of 2.1 minutes per night) and was their second best penalty killer behind Pietrangelo.

Andy Greene also played A LOT of minutes shorthanded. He averaged 20:50 minutes per night, which included an average of over four minutes of shorthanded time a night. While he was below replacement level (-3.6) at even strength, he was the second-best in shorthanded situations (4.032) while playing the most minutes.

Marc Staal is the winner of the worst shorthanded GAR (-4.3), while also leading his team in shorthanded minutes (2.8 min per night). Don’t expect the trade for Trouba to be a significant boost to the penalty kill, as he also finished below replacement level last year as well (-1.3).

Keith Yandle was a dominant force on the power play unit. He led the league in PP GAR (5.5), which was 20% more than the second-best defensemen (John Carlson). He also did this while playing the 4th most PP minutes per game of any defender.

The next installment of the series will look at forwards. Check out all of the player and team charts that I created here.